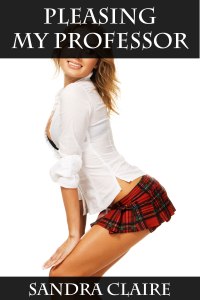 Vanessa got a C on her university paper and is desperate to get it bumped up to an A. She hatches the perfect plan — seduce Dr. Barnes and give him what he wants in return for a better mark. After all, Dr. Barnes has a reputation for sleeping with students for this very purpose. But to bump up from a C to an A requires more than just quick and simple sex.  No, to get an A, Dr. Barnes has something else in mind for Vanessa.

WARNING: This 4,800-word short story contains an explicit sex scene between a student and her older university professor that will leave you hot and bothered, and is intended for mature adults only.

Pleasing My Professor is available at these sites:

This hot and sweaty bundle collects all six of Sandra Claire’s gay erotica stories. Each throbbing story features a randy young man who gets himself into a dangerous situation — a situation that quickly evolves into the most mind-blowing gay sex these young men have ever experienced.

Included in this volume are:
FORCED SUBMISSION: Matty finally understands why Scott has bullied and picked on him his whole life.
FORCED ENTRY: Desperate for money, Dylan makes the wrong choice when he breaks into a gay dom’s house.
FORCED TO TAKE IT: Christian risks it all to hit on the straight cowboy at the country bar.
FORCED IN PUBLIC: A flight to Australia lands Kyle in the Mile High Club with two older men. *** This story is banned on Amazon and is not included in the bundle on Amazon. If you want to read this story, please purchase this book on any other site. ***
TAKEN BY FORCE: Caught buying weed, Craig will do anything if the cop will let him off with just a warning.
FORCED BY MY COACH: Coach Brown has had enough of Kevin and his disrespectful attitude, and tonight he’s going to get exactly what he’s been craving.

WARNING: This 28,000-word short story collection contains multiple explicit sex scenes between dominant Alpha men and the submissive men who live to serve them and will get you hot and bothered, and is intended for mature adults only.

Forced Encounters is available at these sites:

Coach Brown has had enough of Kevin, the disrespectful and undisciplined hockey player who’s also the son of a major donor to the university. As much as he wants to get rid of Kevin, he can’t. After a night of running Kevin through a series of punishing drills, he overhears the younger man trash-talking him in the showers. All of Coach Brown’s self-control vanishes as he storms into the shower and confronts Kevin — he’s off the team unless he gives Coach Brown a real good reason not to.

WARNING: This 4,400-word short story contains an explicit sex scene between a dominating older coach and his younger athlete that will leave you hot and bothered, and is intended for mature adults only.

Forced By My Coach is available at these sites:

Craig is a law student at a Christian university and a steady, long-term girlfriend. He also has a secret drug addiction, and when he gets caught buying weed, he can see his life crashing down around him. The cop that catches him is hard, cruel, and unyielding, and won’t let Craig off with a simple warning. Desperate, Craig makes one final plea, falling to his knees.

WARNING: This 4,600-word short story contains an explicit sex scene between a dominating older cop and a submissive younger man that will leave you hot and bothered, and is intended for mature adults only.

Taken by Force is available at these sites: 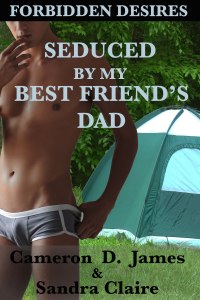 Jay has a crush on Richard, his best friend’s dad. Richard is older, very masculine, cares about Jay, and is extremely sexy. There are just the problems of Richard being straight, married, and the father of Jay’s life-long best friend.

When Richard takes his son and Jay on a camping trip to celebrate turning eighteen, becoming men, and taking their first steps into the adult world, Jay struggles to contain his lust. Hitting on Richard would ruin the camping trip and destroy his friendship.

Seduced by My Best Friend’s Dad is available at these sites:

When Kyle gets horny in the middle of a long flight from Canada to Australia—while stuck sitting between two hot, straight men—he can do nothing except try to hide his erection and focus on the vacation ahead of him. But then the straight guy next to him pulls out a gay magazine. With almost all the passengers fast asleep, Kyle decides to go for it and flirt with the straight guy—something timid, shy Kyle would never normally do, but maybe if the guy was interested, they could do something when they landed in Sydney. The straight guy can’t wait that long. He grabs Kyle and forces him to suck him off in the middle of the flight. The guy seated on the other side of Kyle, who had been fast asleep, wakes to the sounds of a blowjob—and suddenly Kyle, a man who never takes risks, is joining the Mile High Club.

WARNING: This 4,200-word short story contains an explicit oral sex scene between a young man and two older men that will get you hot and bothered, and is intended for mature adults only.

** This story is deemed “Too Hot For Amazon” — they will not sell it on their website! Please visit one of the other retailers listed below — don’t let Amazon dictate what you can and cannot read! **

Forced in Public is available at these sites:

Dylan is down on his luck and resorting to petty theft to make ends meet. But when he breaks into the house of a gay dom, he gets a surprise he never saw coming. Nick, the dom, is furious with Dylan’s attempt to rob him of his valuables and is determined to teach this young man a lesson and discipline him for his mistakes. But when Dylan gets strapped to a table and Nick breaks out the floggers, Dylan is no longer scared, he’s turned on.

Forced Entry is available at these sites:

Donovan never would have imagined that for his eighteenth birthday, he’d be getting strip searched by the cops. Nevertheless, after he’s pulled over for joyriding, the dominant female officer and her hulk of a partner proceed to teach Donovan a lesson he’ll never forget. The only thing is, getting Donovan naked is just the start of what these older officers have in mind…and Donovan is soon taking orders he can’t resist.

WARNING: This 4,400-word short story contains an explicit menage sex scene between a hot young man, a hunky older man, and a seductive older woman that will get you hot and bothered, and is intended for mature adults only.

Strip Searched By The Cops is available at these sites:

Jay is an older man who likes his twinks—he takes them home and pounds them hard. But Chris, the cutie he’s been chatting up online, wants something a little more dangerous. Chris is into public sex and exhibitionism and talks Jay into having a hook-up in Jay’s car in the local park. Things get hot really quick, but the risk of getting discovered only adds to the thrill, especially when they’re almost caught.

WARNING: This 3,000-word short story contains an explicit oral sex scene between a younger man and an older man that will get you hot and bothered, and is intended for mature adults only.

Parking Lot Hook-Up is available at these sites: